BABYMETAL’s video for their new single, MEGITSUNE, set to be released June 19th, is out, and after seeing it, I had to talk about it…  It wasn’t something that could be ignored.  I talk about Sakura Gakuin and its’ derivatives like BABYMETAL far less often than I probably should, for the amount of ass they kick.  I suppose the extremely temporary nature of the Sakura Gakuin members makes it difficult to get close to the girls, as I know their graduation will come far too soon…  But regardless, they are quite a great group, music wise and talent wise.  BABYMETAL is easily the most memorable sub group of Sakura Gakuin, and it’s material like this that make them so.

I loved the set of the PV.

At this point, Su-Metal has already graduated Sakura Gakuin, but they have chosen to keep BABYMETAL around as a group for a bit longer anyway.  I’m super excited about that, partly because it has given us the opportunity to have an amazing song like MEGITSUNE, which we otherwise wouldn’t get… But it’s bittersweet too, because it is supposed to be only temporary, and really, what will fill in the void?  We have the occasional Momoiro Clover song that does crazy idol-infused metal (like Mouretsu, Santa-san’s Bloody Christmas version), and every once in a while H!P will do something pop-rock-ish, but it’s not the same.

Megitsune reigns supreme as BABYMETAL’s best song to date, in my opinion.  It’s really quite incredible across all fronts.  It’s actually very Momoclo-esque in a few elements, which might be what draws me to it so much.  This song has the same multi-genre-spanning, and genre-bending feel of a Momoclo song, as well as some traditional Japanese elements, which was a staple of Momoclo’s first singles.  That said, this is certainly BABYMETAL and could never be mistaken for Momoclo – Su-Metal’s vocals are of such a high calibur, none of the MCZ girls will ever reach that level.  She’s impressive and commands this song.

Yui and Moa, not serving much purpose other than the cute factor, but I like them anyway.

The infusion of idol, pop, metal, and traditional japanese styles makes this song unforgettable, catchy, and cool.  Since this is an idol thing, there is plenty of cute to be had as well, in the form of Yui and Moa being infectiously adorable in their screen time and backing vocals.  Don’t worry about the cute overshadowing anything though, the video has a fair share of creepiness with the fox masks as well. 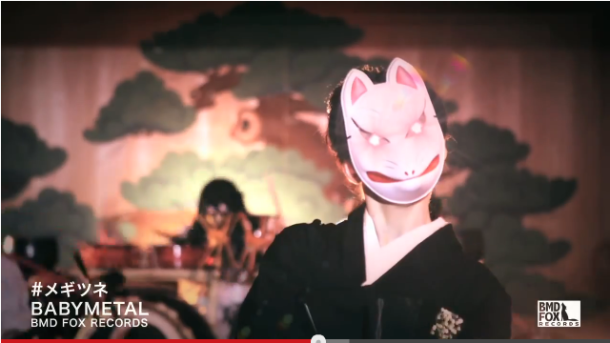 I’ve loved just about everything BABYMETAL has done, but this one easily edges them all out for their best material.  It also shows a nice progression for the group, when compared to their first material.  I love Doki Doki Morning, but where that felt like a song written to be an idol song that was adapted with a death metal instrumentation, this doesn’t feel that way at all.  It feels like a serious song, written to be the beast it is. 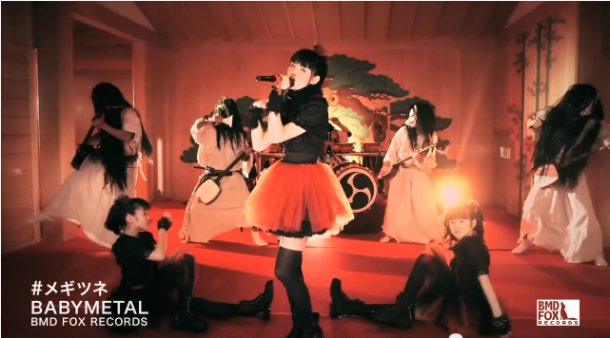 The poses are probably the most idol thing about this song. Not much else is.

If you have any interest in idol pop fused with metal, check this out.  If you don’t, broaden your horizons and check this out, it might be different and cool enough to interest you anyway.  Highly recommended! 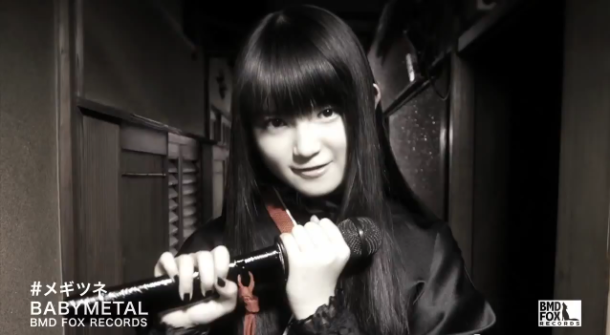 One thought on “BABYMETAL’s Megitsune – Rocking the hell out of whatever genre it is.”