I was having a really shitty week, when lo and behold, I got my copy of Moretsu in early!  Gotta love CD Japan!   Although I’ve talked about this release a lot already, I’d like to do a full review – I’ve been looking forward to this release for nearly 3 months, so I’m insanely happy to have it in my hands now!

In my hands, literally. 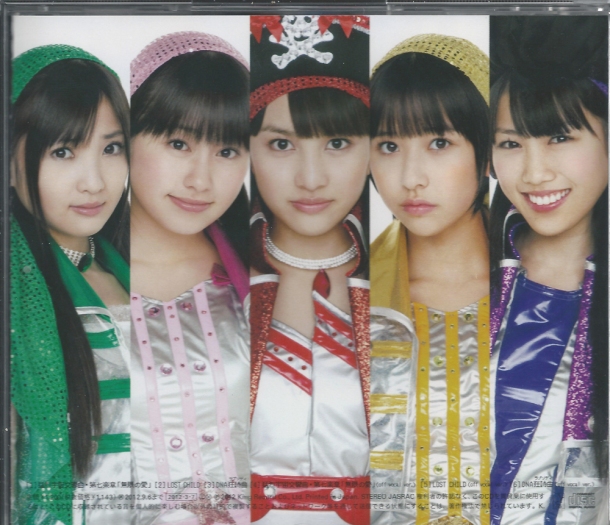 Everyone looks great in all the CD pictures. <3

However, I really liked the picture on the inside.  Very cool and a gorgeous shot of their profiles:

Their eye and lip makeup in this shot is really pretty.

Since I got the first press, I also got a small card as a bonus. 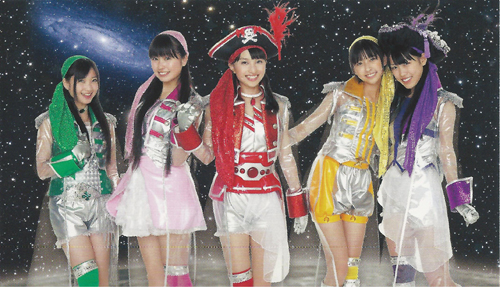 You can’t tell in the scan, but there are holographic sparklies on it.

But, that’s all second to the real content – the contents of the CD.  We’ve got 3 songs on the regular edition (only the regular comes with the C-side, DNA Rhapsody), plus the instrumentals to all 3.  So let’s start with track one…

Brace yourself for this one, because this is the most intense, exhilarating song Momoclo has released to date.  And after having let it fully sink in over the past few months, I can say without reservation that it is the BEST track Momoiro Clover has ever put out and also my favorite song to come out in YEARS.

I think to really appreciate it, you need to really listen to it in full, with full attention, at least a couple times, and just really let the song grab ahold of you.  Once you get into it, it’s absolutely mind blowing.  We’ve got an awesome backing track, a choir, Marty Friedman wailing on the guitar, and all 5 girls singing (and sometimes screaming) their lungs out.  It’s operatic, it’s metal, it’s Jpop, and it’s certainly not boring by any stretch of the imagination.  This one is bound to be my favorite song this year unless something very surprising happens. 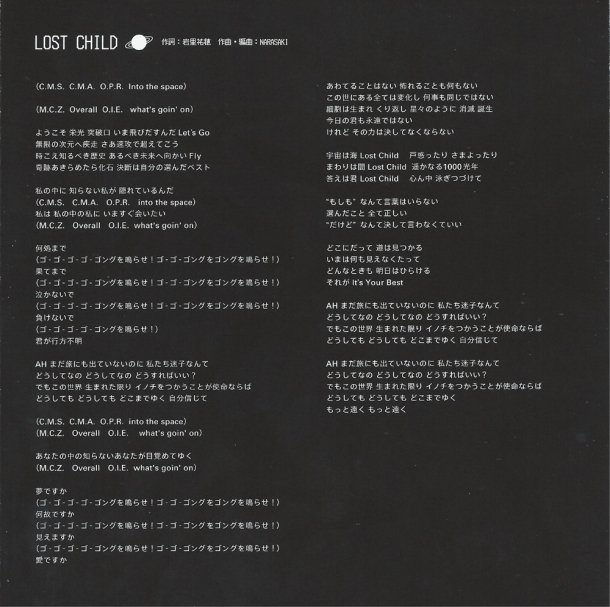 The lyrics for Lost Child

Coming off the high of Moretsu, we have the B-side, LOST CHILD.  Although it lacks the energy of Moretsu, it has plenty of appeal in itself.  It’s a very different type of song, more serious and mature overall, but extremely different and interesting.  If you’re a person that usually skips the B-sides, thinking they’re just going to suck, don’t this time.  LOST CHILD is a strong enough song to stand on its own (certainly stronger than some previous singles themselves).

The beginning of the song has some cool computerized vocals, before the song breaks into the heart of it.  There are some really outstanding vocals in this song for me – I absolutely LOVE both Kanako and Momoka’s first solo lines.  Also surprisingly good was Ayaka – her vocals somehow worked for me on this one, and her “dokomade…” was gorgeous.

LOST CHILD, although it does not sound like anything Momoclo has done before, does have the trademark “3 songs in one” type of feel to it, with there being distinct, different sections of the song.  I really enjoyed how it all came together.  This is definitely one of Momoclo’s stronger songs, and I would recommend it even to people who don’t usually go for the insanity that comes with this group.  It’s toned down, but very cool.

The lyrics for DNA Rhapsody

I’ve listened to this track probably over 10 times since I got the CD this morning, and I’m still a bit on the fence with it.  There is a lot that I like about it – the instrumental is really cool, the vocals are good and my favorite girls sound great throughout, I like the harmonies, and it’s overall a pretty good track.  The problems I have with it so far is that I haven’t found it to be particularly catchy, even though I like it, and it’s very disjointed at times.  Some of my favorite Momoclo songs ARE disjointed (like Pinky Jones), but it’s in a less positive way I suppose?

It’s not that I don’t like the song, I think I just need more time with it.  DNA Rhapsody is easily the weakest track, but it’s still stronger than some of the other C-sides Momoclo has had in their career, and is not a mar on the single overall.

After the songs, we get the instrumentals to all 3 songs.  Usually that’s something I just skip, but I implore you – if you liked Moretsu, do listen to the instrumental itself!  Without the vocals, it’s still a killer track, and the intricacies of the music are easier to hear in this.  The drums going at the beginning, the bells ringing in the refrain, the electric guitar solo, all of it makes for a wonderful instrumental.  Of course, Lost Child and DNA Rhapsody both had cool instrumentals as well, but only the title track’s made it onto my iPod today, and that’s because I have no qualms listening to it just as it is (and ocassionally belting out the lyrics over it).

Overall, this release is fantastic, and I would recommend it to anyone without reservation.  If you haven’t heard it, you’re missing out!